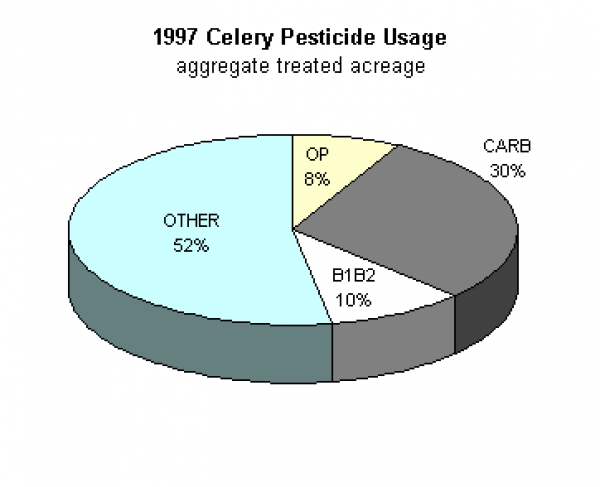 Celery is well-liked by the health-conscious because it’s low in calories — but the stalky veggie is not low in another health concern: pesticides. Eat conventionally farmed celery, and you’re eating the veggie found to have the most pesticide residue, according to green nonprofit Environmental Working Group’s latest Shopper’s Guide to Pesticides.

In a new version of the Guide, celery displaces the peach as the dirtiest piece of produce — though both were already on the “Dirty Dozen” list of most tainted produce last time around too. New inductees into the list are blueberries, spinach and potatoes — which replaced lettuce, carrots and pears.

Chemical Control of Leafminer in Celery:
Current control practices require numerous applications and rotations of insecticides. Control costs are high and only a small number of insecticides are effective. Leafminer exhibits high fecundity and pesticide-tolerance, factors that limit the lifespan of any given insecticide directed at it. In California, the carbamate compound oxamyl (Vydate) has served as a mainstay control agent since its registration in the late 1970’s. Abamectin (Agri-mek) entered the rotation in the mid-1980s, and in 1998, cyromazine became the newest chemical tool for leafminer control.

More in this category: « Organic Lentils Which is healthier ? Butter vs Margarine - Ants have their vote. »
back to top