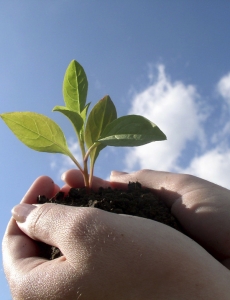 Many of us have run into this dilemma while grocery shopping: Should we buy organic or not? Organic, local, natural -- the choices are tough to navigate. But that's not all. What if another option was thrown into the mix? Carrots, organically grown carrots or biodynamically grown carrots?

Well, what is Biodynamically grown?

Biodynamic methods are considered a form of organic farming, but biodynamic farming expands on organic's sustainable and natural approach with a holistic, farm-as-an-organism school of thought. The concept is as the word itself would suggest: a combination of biological and dynamic practices, "bio" meaning life and "dyn" meaning force.

Like organic farming, biodynamic farms stress biological methods in regard to humane treatment of animals, food quality and soil health (such as green manures, cover crops and composting). However, biodynamics takes it a bit further. In addition to organic biological practices, biodynamic practices also incorporate metaphysical aspects of farming. You read that correctly -- metaphysical. Farmers who practice a biodynamic approach consider the life force of the farm. Think of it this way: Conventional farming is to biodynamic farming as conventional medicine is to homeopathic.

Around the turn of the 20th century, farmers began to use chemical fertilizers in their agricultural practices -- and an unforeseen consequence of that new practice was a deterioration of conditions on farms. Some farmers began to notice poor soil conditions along with weakened health and quality of crops and livestock.

In an effort to find a remedy, Dr. Rudolph Steiner, scientist, philosopher and founder of the Waldorf School, developed the idea of biodynamic agriculture in Europe in 1924. Steiner believed that a farm is a living organism and should be self-contained and self-sustaining. In short, that means he believed that a farm should be able to create and maintain everything needed to stay healthy and fruitful -- an alternative agricultural idea that doesn't include chemicals.

We don't adhere strictly to biodynamic farming practices here at Byron Bay Organics. We are certified organic and we support all forms of farming that follow these basic priniples. But we are fascinated by the concepts behind biodynamic farming and follow the literature with great interest. Anything that helps humanity's quest for better health and a sustainable future has to be a positive.

More in this category: « Organic Food News - Our Blog: Know what you eat! Mulching »
back to top