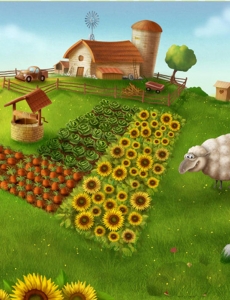 The term organic farming goes back to the 1940s when a British writer, Lord Northbourne, described an integrated farm as a “dynamic living organic whole” (Scofield 1986, 1). This idea of wholeness and complexity is still present within the definition of organic farms today (Høgh-Jensen 1998).

Unfortunately, organic farming is often described as an opposite; it is defined by what it does not do (Tamm2001).

So organic farmers do not use synthetic fertilizers and pesticides and do not plant genetically engineered seeds. But what is the proactive definition? What does organic farming mean?

According to organic agricultural researchers and the farmers ..., it means crop rotation (changing the crops grown in a field each season) to build healthy fertile soil that has few pest problems (Watson et al. 2002). Organic farmers believe that “weeds are an index of the character  of the soil,” so spraying pesticides only treats “the effect, not the cause” (Walters and Fenzau 1996, xii). Organic farming means using “beneficials” – beneficial insects such as ladybugs that destroy the bad bugs like aphids, and beneficial interplanting of certain plants to keep pests away (Lampkin 1990). It means unique farm management decisions in terms of crop choice, planning, harvesting, and marketing (Gaskell et al. 2000).

It means marketing through distinct channels – farmers must work hard to identify and maintain their sales outlets, often selling to numerous wholesalers, to brokers, or directly to consumers (Lampkin and Padel 1994). Marketing their farm products sometimes takes as much time as growing them, as organic farmers are trying to gain back the farmer’s share of the customer’s food dollar (decreasing from 40 percent in 1910 to only 10 percent today, according to Magdoff et al. 2000) by marketing directly to consumers.

Organic farming also means diversity – growing a large number of crops both for ecological diversity and for sales diversity; not putting all your crops in one basket, so to speak (Newton 2002).

It means independence – staying outside the mainstream industrial agricultural system as much as possible. And most certainly, it means innovation – trying new crop rotations or varieties or timing, trying new machinery (that they probably build themselves), and trying new sales venues to meet consumers’ demands.

More in this category: « Byron Bay Organics The Home of Organics »
back to top